I know its been a while since I've posted.  Preparing to teach, starting classes in my MFA program, and other things have kept me busy.  I'll update you on all of that in a later post.  For now, whats on my mind is the final installment of Suzanne Collins's Hunger Games trilogy, Mockingjay

Wow.  I've already talked about how impressed I was by her first book.  I haven't reviewed her secondbook, Catching Fire

, and probably won't get around to it, but it didn't disappoint.  I knew it would be difficult for her to exceed my expectations after such an amazing first book, and she came pretty close.  I don't think it was quite as good as the first, but still an amazing book in its own right.  She did a great job of progressing the series.

While Catching Fire progressed the series admirable, Mockingjay completely exploded the story and issues (in a good way).  The only progression of a trilogy that has been so well constructed that I can think of (and, admittedly, this one towers far above the Hunger Games) is Dante's Divine Comedy.  (Thats right, I just compared The Hunger Games to the Divine Comedy.  You heard it here first, people.)  Really, though--Collins's method of constructing a trilogy is worthy in every way.  She got that right, at least.

And she got a whole lot more right than that.

What caught me off guard (and impressed me most) about the third book was how the stakes were higher than the other two books in just about every way imaginable.  All the conflicts--between people, between the Capital and the Districts, between ideas and philosophies--were bigger.  More pressing.  And, of course, there was no shortage of new conflict added to the mix, as well as old conflicts that I thought had taken a back seat.  I'm avoiding specifics here because I'm avoiding spoilers (because I don't have much time and want to get these thoughts out), but hopefully you're getting the picture.

I will say, perhaps as a warning, that Mockingjay was a very, very violent book.  But in my opinion, it wasn't excessive.  It was necessary to the story Collins was trying to tell and the world she had created.  It was disturbing at times, much more so than either of the first two books, but it drove the themes of her books that much closer to home.

The book wasn't perfect by any means.  The prose in the beginning was slightly annoying at times (almost Meyer-esque, dare I say it), and there were one or two rather heavy-handed sections where Collins's themes seemed to take over her writing.  But other than that, her prose was very crisp, and Katniss's personality was clear as crystal.  Also, I won't mention how the love triangle in these books worked infinitely better, and seemed much more real, than a certain other series of young adult books that may or may not involve vampires and "werewolves."

And the ending--bittersweet, unexpected, but satisfying.  I couldn't ask for more.

In my opinion, the Hunger Games trilogy is a must-read.  Get your hands on it now, if you haven't already.

it was a dark and storm-blessed night... 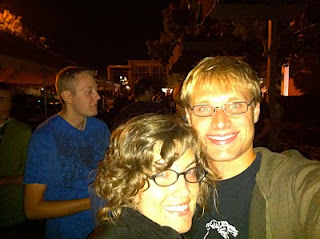 Email ThisBlogThis!Share to TwitterShare to FacebookShare to Pinterest
Labels: brandon sanderson, the way of kings

. . . why I haven't posted in more than a week, just have a look-see below.  Its because I've been at the beach in southern California for the past week, watching sunsets like this: 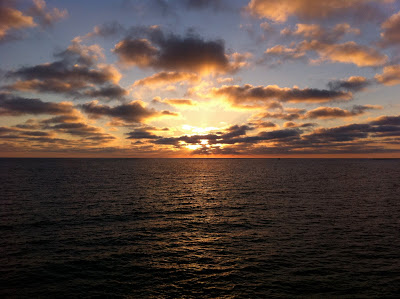 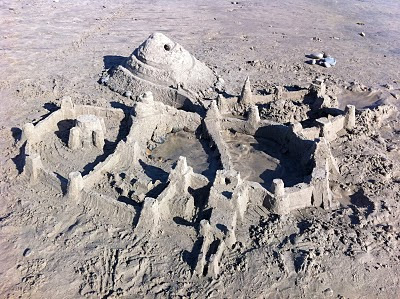 Or, from another angle: 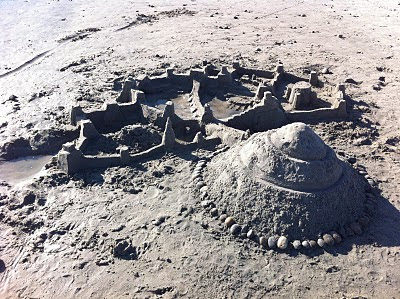 And enjoying the general scenery right outside our back door, including but not limited to: 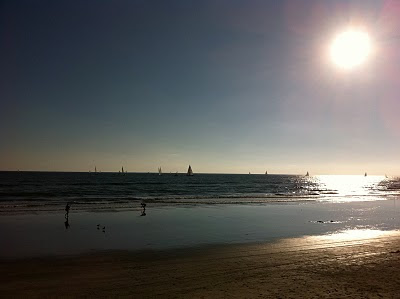 ...as well as doing a whole lot of writing, sunning, a variety of aquatic ocean-related activities, hours upon hours of Scum (the card game of course, although there was some questionable filmy stuff around some parts of the ocean . . . they told us it was "algae" but you never know . . .), and lots of lazing around in general.  With family and friends.

And by things, I mostly mean my writing*.  Last week it was going well enough, I was getting about 2k words/day which is respectable.  This week its been even better, and I'm getting between 2.5-3k/day, all on the YA NOVEL project of course.  Things are coming along with it, and I can't really ask for more than that.  The plot is progressing fine, my main character is really getting fleshed out.  It doesn't feel quite as true as THE RISING, but I don't yet think its terrible.

The first draft process is interesting for me, especially because I haven't yet revised any of my novels.  My first project (THE RISING) is finished and awaiting revision, but I've decided not to tackle that until I can finish the first draft of my current YA NOVEL project, along with perhaps another short story and/or nonfiction piece.  That way, come Fall semester, I'll have the first drafts of all the major writing ventures I want to work on complete, and I'll be able to focus on revision.

It won't be ideal--depending on how the workshop classes are structured, I could be simultaneously revising up to three projects at the same time (my main goal is to have THE RISING revised by the end of October so I can get it out to some alpha readers, but I'll also be revising whatever I'm submitting in my nonfiction and YA novel workshops along the way--as well as writing new stuff, mostly short stories, every so often . . . hopefully . . .).  It will be a busy semester, but I think I'll be able to handle it.

Anyway, what I'm getting at:  the first draft process.  Other than short stories, I've never really revised any of my creative work (yet)--its not that I don't believe in it, because I certainly do.  I just haven't gotten around to it yet, for the reasons mentioned above.

But here's the thing with most of the first drafts I've been crafting lately:  I plow right through them, getting the basic story and character arcs out on paper (or on my word processor), ignoring problems of about every shape and size with the justification that "I'll fix it in post."

Will these problems actually be fixable in post?  I don't know.  I suppose I'm going to find out this Fall.

I admit its something I worry about, to a degree.  I'm putting a fair bit of work, time, and energy into these projects.  They're investments.  If it turns out that they're completely unsalvageable**, well . . . you might be able to imagine my chagrin.

But, although it will be frustrating, I'm not too worried about it.  That surprises me, but (I think) its true. It will be disappointing, sure, and frustrating in twenty or thirty different ways, but it won't be the end of the world.  I'll be able to learn from them either way, is the idea (see footnote ** again).

Of course, ideally these novels will turn out okay, if not better-than-okay.  I'm pretty sure THE RISING will.  The more I think about it the more anxious I am to get back to it and see what that thing can really DO.  I'm more worried about the YA NOVEL, but even that I think will turn out satisfactorily.  Again, it may not be publishable in the end, but that won't be the end of the world.

Anyway, at this point there's nothing for it but to push through and see how things turn out.

And you know what?  I'm optimistic about it.

P.S.  This post was meant to be about BYU's MFA program, but my mind was, apparently, occupied by other things.


P.P.S.  Have you guys seen my YA NOVEL progress bar?!  It's like watching a drag race.  Really.

*  If you're curious, everything else leaves me with a cavitous lack of things to complain about, too.  Other than lots of friends leaving us for some exciting (and some less exciting) places, while we stick it out in Provo for another two years.  But other than that, everything is actually quite dandy.


**  By unsalvageable, I mean this:  after attempting revisions I think the piece is so utterly putrescent that I'm positive it will never be published anywhere, and know that even attempting to send it in to places would be a complete waste of my time and not a learning experience in any way--AND try as I might there is nothing I can seemingly learn from the disaster that I could do better in future first drafts.  So, basically, a worst-case scenario.  I don't think its likely to happen for either of these books--I don't think either of them will be that bad--but that also doesn't mean I expect both of them, or either of them for that matter, to end up published any time soon, if at all.  My hope, essentially, is that they will be good "learning experiences," making me ultimately a better writer and helping me to understand what I can do better the next time around.  If they can get published along the way, that's fantastic.  But I'm certainly not expecting it.
Posted by cbh at 8/06/2010 12:30:00 AM 4 comments:

Email ThisBlogThis!Share to TwitterShare to FacebookShare to Pinterest
Labels: revision, The Rising Part 1, writing, YA Novel

Had an awesome family reunion this weekend, on my wife's side.

Family is good stuff. Makes you think, just a little, about how important the whole "building-relationships" thing is in life. Just a thought.

In writing news, you may have noticed that the progress bar for my YA Novel project is slowly creeping up there. DANG STRAIGHT. I've found a groove, and I'm hoping to stick with it for a while. The pendulum is swinging and I'm riding it for all its worth. I'm sure there will be some rougher spots ahead, but with any luck (and with a lot of hard work and dedication and motivation and decapitation [one of these things is not like the other . . .]), I'll be finished with this novel in the next three or four weeks. Knock on wood.

So, basically, all is well with the world, and writing is the bomb.com.