FEAR THE STARS cork board

For my last few novels I've taken to writing a summary of each chapter on 3x5 notecards and laying them out on the ground or on a cork board. The following is what I did for Fear the Stars while I was going through the final revision a few months ago (smudgified to prevent spoilers):

I also use Scrivener as my writing software, and Scrivener has a cork board feature which I use extensively. That said, there's something about physically seeing all of my chapters and scenes in order, and being able to move them around in a physical space, that I find very helpful.

Fear the Stars comes out in about seven weeks! I've already started getting my advanced copies from my publisher, and I have to say I'm very excited about this book. I realize I say that every time, but I honestly think it's because of a positive trend in my novel-writing abilities as opposed to any bias on my part (I mean, let's be clear, there's that, too, but still).

If I were to rank my Chaos Queen novels, I actually think Duskfall and Dark Immolation are about on the same level. They're very different novels, with very different strengths and weaknesses, but if I had to grade them on a whole I'd say they're of roughly the same quality (which is, in my opinion, pretty good quality). I think Blood Requiem, on the other hand, is clearly superior to the first two novels in the series. It's tighter, the characterization and character voices are stronger, and overall the writing is just better.

I think Fear the Stars is to Blood Requiem what Blood Requiem was to the first two books in the series: tighter, stronger, better. That's a good thing for a number of reasons, but mainly in that I think it's displaying how I'm generally getting a better grasp on what it means to be a writer. That's a trend I hope continues throughout my career.

As far as Dawnrise goes, it definitely has the potential to be my best book yet. It might end up being more or less on par with Fear the Stars, or, perhaps, just a smidge lower (I really did like FtS, ya'll). Only time will tell, of course, but based on my outline and what I've written so far, I'm feeling very confident about the ending book of the series.
Posted by cbh at 4/29/2019 04:49:00 PM No comments:

So, a few things.

First of all, quick update on the writing, because I've been posting a lot of "fluff" lately and I don't want any readers to think I'm off the wagon as far as progress on book 5 is concerned. I'm not! Progress on Dawnrise continues to go well; I'm currently working through Part II of the novel (of four parts). I'm hoping to cross the midpoint threshold before May is out, and then get the rest of the book done in June. So far, I'm feeling very confident about the book. It's a bit surreal to be ending the series I've been working on pretty exclusively for the past six years, but it's awesome, too.

(Also, brief side note, I'm hoping I have some more stuff to announce relatively soon. I've got a number of balls in the air in regard to future projects after the Chaos Queen Quintet, and I'm hoping one or more of them finds a nice home very soon.)

Secondly, Avengers: Endgame was, just, WOW. I'm still sort of reeling from it, but my first impressions are that it was a worthy "ending" to the franchise. Or, at least, to the first four phases of the MCU or whatever. I'd honestly be happy if they called it here, but they're not going to kill they're golden-egg laying goose, you know? Anyway, I thought it was very good. I might post more thoughts on that here later, and it's possible my opinion will change (my opinion of Star Wars VIII went from "that was pretty great!" to "this is not as good as I thought it was" to "this is a dumpster fire of missed opportunity occasionally spattered with great moments" each time I watched it, so all bets are off I suppose). But, right now, I thought it was incredibly well done.

Ok, and now for the whole reason I'm writing this post.

Taylor Swift is back, ya'll!

Okay, slight context: I'm a reasonably hardcore swiftie. Been a fan of her music since Fearless, been a fan of her fan community (seriously they're a bunch of Sherlock Holmesian detectives over there, just spend some time in the TS subreddit if you don't believe me) for slightly less time. I'm not going to go into the details of the how's and why's as to why I like Taylor Swift and her music (I mean, is that even necessary?), but, you know, it's just an FYI thing. That's one of my corners of geekdom, if you will (the subject of a blog post I've been meaning to write for a while, actually, and one I might even get around to one day).

So. TS fans have been going nuts over the past couple weeks (past couple months, really) at all of the alleged hints and clues that TS may or may not have planted (some she definitely did), and it all led to the midnight release of "ME!," her new track and music video. (I was initially worried when I heard the track featured Brandon Urie of Panic! at the Disco--that band is hit and miss for me, and even their hits have never been that memorable imo--but he nails his part, his voice is perfect for the track, and it blends well with Taylor's.

Clearly the era of TS7 will take a brighter turn than TS6 (Reputation), which I'm okay with. I love me some darkness, and while I loved a lot of aspects of the Reputation era, this is certainly more true to form for her. My main criticism of Reputation was actually that TS occasionally seemed...uncomfortable in the darkness. When she did it well it was awesome, but sometimes it felt a bit forced. Either way it was a step out of her comfort zone, which I think is praiseworthy, and for the most part she nailed it, but I'm excited to see what she'll do as she comes back to a more familiar tone--and how she changes and innovates it, hopefully.

Yikes. This is just scratching the surface of my TS fandom, and I'm going to leave it there for now. One day I might write a big long thingy about how I feel towards all of TS' discography, but that is not this day.

Today, let me just show you this:

Little known fact about me: I dabble in sketching and drawing. I do it on occasion during the day to take a break from writing. Did this one in anticipation of, well, you know: 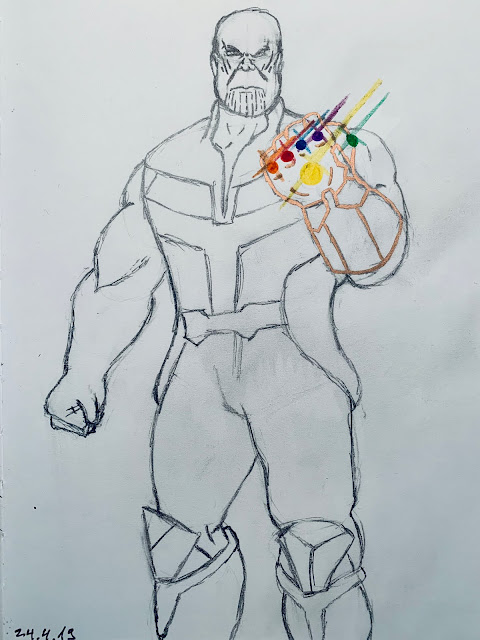 It's become something of a tradition.

Er...did I mention we've recently added another Little One to the mix? She's been a big contributor to my blog silence lately, tbh. But Little A is pretty incredible, and B continues to amaze. 🖤🖤

UK Version of FEAR THE STARS 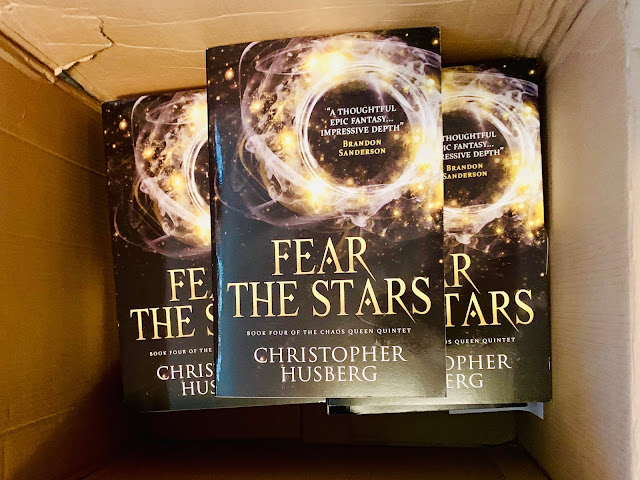 I may or may not be bringing a few copies with me to FanX this weekend. Just, you know, in case.

Well everyone needs to see this 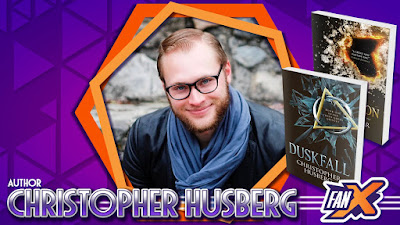 I'll be at Salt Lake FanX this Friday and Saturday. I've got one panel about Marvel's The Defenders series on Netflix (i.e. Daredevil, Jessica Jones, Luke Cage, and Iron Fist, with a smattering of The Punisher thrown in there). That particular selection of programs is interesting to talk about, if only because there are such extreme highs and lows throughout.  If you're interested, check out the panel in Exhibit Hall 1831 at 6pm on Friday! 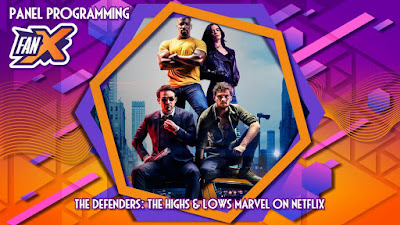 Retreat to the House on the Hill V

Once again, I head the pleasure of attending the now annual Retreat to the House on the Hill. This was my fifth time attending the writing retreat, and incidentally the fifth time the retreat has been held--so I've been around since the beginning. It's a fantastic opportunity to get a ton of writing done, as well as get to know some other writers.

Dave Butler, author of the Witchy War series among many other books--and my touring teammate--continues to serve as gracious host of the retreat. I spent time with many other talented and awesome writers while there as well--and I'm particularly proud of the work I accomplished while there. For me, it went more or less like this:

Monday: Outlining Dawnrise, the fifth and final books of the Chaos Queen Quintet.

Tuesday: Finished the DR outline. (I'd hoped to be finished by the outline before the retreat, but alas, that did not happen. And, tbh, I'd started getting a bet down on myself on Tuesday because, while I was accomplishing a lot of work by finishing the outline, I wasn't getting tangible words written, and that bothered me. [To be clear, I don't think it should have bothered me--work is work, and writers get things done in all kinds of ways--but I find retreats are at their most useful for me at the drafting phase, where I can just churn out a lot of words. So, I was letting that get to me.]) But, once finished with the outline, I did start writing the Prologue of DR, getting a whole 255 words into it :-D.

So, all things considered, I wrote just over 32,000 words for the week. That's more writing than I do in a month, sometimes, so I'm pretty happy about it. And, despite heavy outlining at the beginning of the week, I'm very happy I was able to dig into a decent word count total at the end. I think that puts me at just over 20% as far as my progress on Dawnrise goes, and that feels pretty good.

Oh, also I won the Edward M. Kovel award for "Best-coordinated loungewear on a Curmudgeon." That was the exact Kovel award I was gunning for, tbh, so I couldn't be happier there, either! 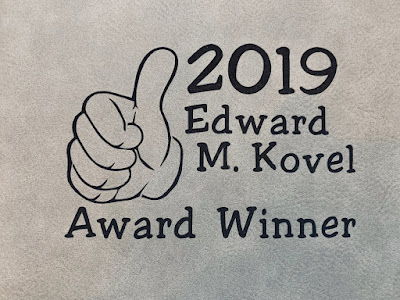