First of all:  I wrote 4k words today!  I think that's pretty cool, considering I'm composing a first draft (as opposed to revising).  My general goal for composition writing is 2k words/day, so doubling that feels pretty good.

This story's process has been interesting.  It's a short story that I'm planning on submitting to the Writer's of the Future contest for Q4, and my original word count goal for the story was 10k.  Well, I hit that today, but I'm still only about 2/3 done with the story; I think it'll be closer to 15k when all is said and done.  That's kinda pushing it for this contest.  Technically they accept stories up to 17k words in length; I don't think I'll go beyond that, but the longer a story is, the higher expectations are for that story.  There is more room to develop characters, expound settings, and complicate plot.  That's not to say that a novelette-length piece will inevitably trump a short story, but I do think expectations play a role, there.  So the more I write, the more I need to be absolutely sure that what I'm writing is top-notch stuff.

I'm not sure I've hit that point with this story yet.  I mean, I rarely feel like I have top-notch stuff in a first draft, but often I'll get a writerly gut feeling that what I'm writing has the potential for that kind of thing.  So, while there are some good ideas bouncing around in this particular story, I haven't fallen in love, yet.  Sometimes that happens in the beginning of the first draft for me, sometimes it happens when I'm reworking the ending on the third revision.  And, sure, sometimes it doesn't happen at all.  Either way, I'm definitely hoping I can get to that point with this story; I'm not sure I'll have a winning piece without that feeling.

I've also been outlining this story, which is different than what I've normally done, especially for short stories.  I'll have to tell you more about that process in a later post.  But, for now, I'm happy with what I've done today.
Posted by cbh at 9/12/2013 07:36:00 PM No comments:

Five months ago, I was in NYC and visited this place:

It was a surreal experience.  I remember thinking the monuments were oddly depressing: dark chasms, the water all flowing downward into a space I couldn't even see.  I remember touching the names inscribed in bronze around the memorials, and remembering where I was when it happened.

I can still remember it exactly, of course.  I was getting ready for school in the morning, and my Mom knocked on my bedroom door to tell me that a plane had crashed into a World Trade Center tower.  She said it might have been a terrorist attack--at that point I don't think anyone really knew what was going on.  I immediately thought of my Dad, who was at a conference on the east coast.  She said he was alright, and I was relieved, and went to school not thinking twice about it.  For better or for worse, I was probably much more worried about what I was wearing, or who I would eat lunch with, or a project that I had inevitably procrastinated to the last moment.

At school, there was a television on in every room.  Footage of the attacks played nonstop, and classes were all but cancelled.  Slowly, I realized the gravity of what was going on, what was at stake and the staggering number of lives lost.  I felt angry, I felt scared, I felt useless, and I felt sad.  I can still see my wide-eyed friends staring in disbelief at the television screens, at each other, and at me as we tried to talk about what was happening.  I felt an odd connection with them, and even with people I had never associated with before.  I explored those connections tentatively at first, but soon learned they were sources of great comfort.  Because if there is one thing that can be said about the events of 9/11, it is this:  they brought us together.  They didn't break us.  They didn't split us.  They knit us together, in grief and in sorrow and in pain, and in hope.

My Dad was one of thousands who went to Ground Zero shortly after the attacks.  Thousands of people, from different backgrounds, races, economic classes, and orientations came together to help those in need.  There have been many moments in which I've considered my Dad my greatest hero; that one stands at the top of the list.

At the memorial five months ago, I remember feeling amazed at how quiet it was.  People spoke only rarely, in hushed tones.  Even the city around us seemed quieter, more subdued, more reverent.  I was standing where thousands of good people had lost their lives.  I was also standing where thousands of good people had come together, had put their sweat and tears into a massive effort of recovery.  I glimpsed then what President Lincoln meant about hollowed ground.  I knew that where I stood was sacred.  It was a place apart from the world.

We may not be as knit together now as we were twelve years ago.  Far from it, most would say.  But there is value in taking today, this day, to reflect on what happened then.  Remembering the fallen and remembering the heroes keeps the hope alive.

So, today, I'm going to remember.

So, I figured I would give y'all some more info on the novel I just finished--Duskfall.  It's a dark, heroic fantasy with epic tendencies (lol).  Here's the pitch:

Winter never thought she would marry at all, let alone to Knot, the man she found floating belly-down in the sea one year ago with no memory of who he was or where he came from.  Things get even more complicated when soldiers from the rival empire and two agents from the most powerful magic assassins in the world show up, both insisting that Knot is their property and demanding his return.  Winter and Knot are forced on a journey to discover his dark past, sort out their feelings for one another, and confront the dangerous addictive magic within Winter.

Basically, it's Bourne Identity meets Dune meets Requiem for a Dream in a fantasy world.  And it's AWESOME. 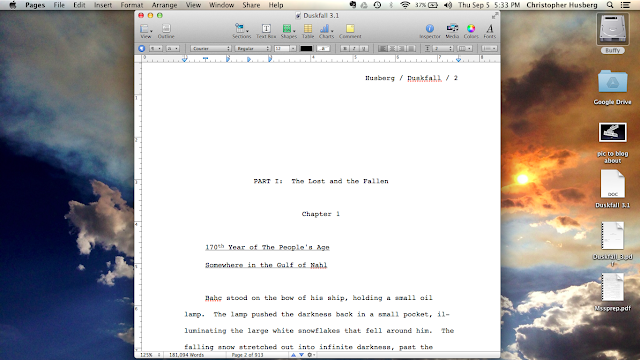 So there you have it.  Right now I'm outlining a short story for WoTF.  It's the first time I've tried outlining in some time, so I'll definitely keep you posted on how it goes.  I think it will be a good exercise, if nothing else.  After the story, I'm moving on to another novel!

Also, word to ya mayumz.

Also, I just stayed up all night.*

Also, guess what I am decidedly NOT right now:

Yeah.  I am, like, the exact opposite of that.

In other news, I went to Worldcon (Lonestarcon 3) this last weekend, and it was pretty cool.  Hung out with some old friends like Rob and Steve the Bookstore Guy (who, incidentally, was nominated for the Hugo "Best Fanzine" category for his book review site), and met some new friends like Paul Genesse and Genese Davis (no relation, and unfortunately they are both married to other people so a "Genese Genesse" situation doesn't look like it's going to happen).  Also, met many other awesome fans, writers, reviewers, and in general all-around awesome people who are too numerous to name.

Had a workshop with Martha Wells and Greg Wilson, and they actually were kinda okay with my Duskfall manuscript.  Like, they said they would totes keep reading it and everything.  And here's a shameless plug:  In a panel about writing combat scenes, Martha Wells totally mentioned me and said I did a good job with the writing of the fight scenes in the workshop.  So, yeah, that was awesomesauce.

And, best of all, hung out with and met lots of awesome agents and editors and the like, to whom I shall now ever-so-gallantly-voraciously-dynamically-suggestively-combustively-graciously(?) begin sending my manuscript.

Oh, and saw two sets of long time friends and their respective babies, both of which were frickin' adorbs.

So, basically, things are awesome and I am happy right now.  That may change depending on if/when I crash, today, but there you have it.

Cool things are in the works, by the way.  I'm re-starting the next novel in the Duskfall world, working on another WOTF short story, and might even be playing some The Last of Us in the nearish future.

I'll try to keep you posted on the goings-on.  So, like I said earlier...word to ya mayumz.

Email ThisBlogThis!Share to TwitterShare to FacebookShare to Pinterest
Labels: before the dark, duskfall, lonestarcon3, the last of us, The Rising Part 1, The Rising Part 2, Worldcon, wotf
Newer Posts Older Posts Home
Subscribe to: Posts (Atom)