In case any of you are hiding under rocks, Netflix's flagship Marvel series, Daredevil (hereafter DD), released Season 2 a couple weeks ago.

Folks, this show is phenomenal.

DD's first season was groundbreaking stuff. Phenomenal fight scenes that paid homage to some of the greatest cinematic fights of all time. Profound, multi-faceted characters. Social relevance. Great acting. And, of course, one of the greatest MCU villains of all time. DD also opened the gate for three other Netflix superhero programs (Jessica Jones, Luke Cage, and Iron Fist) that would eventually culminate in a Defenders series tying them all together, Avengers-style.

That's all very exciting (and intimidating, and overwhelming, as the MCU is quickly becoming..but that's a rant for another day). And when Jessica Jones came out last fall, it blew me away--even edging out DD's first season, imho (JJ offered all of the incredible things from DD's first season, but Jessica's arc was even more compelling to me than Matt Murdock's).

Unfortunately, I think DD2 falls short of DD1 and JJ.

[This seems like as good a place as any to say SPOILERS FORTHCOMING, PEOPLE! BE YE WARNED!]

Don't get me wrong--DD2 is still really fantastic television, and has some great stuff in its favor:

But, of course, I did find some flaws with this season...and they all sort of revolved around Elektra.

I actually really liked Elektra's character, and I totally ship her and "Matthew." Elodie Yung makes Elektra sophisticated, captivating, and edgy. It was pretty much everything involving the Hand that I didn't particularly enjoy. The faceless ninjas. Zzzz. The lack of a solid villain (I was really feeling the gap left by Fisk). The seeming lack of real motivation on the Hand's part. (So you're after a weapon. Fine. That means you want to kill people, I suppose. Fine. BUT WHY DO YOU WANT TO DO THAT?! GIVE ME SOMETHING MORE FOR CRYING OUT LOUD.) The storyline involving the Hand wasn't terrible, but compared to the awesomeness that went into the Punisher's plot, and DD1 and JJ, it really fell short for me. Also, that ending? Elektra dying and then showing up in the regeneration coffin thingy? I totally called that. Like, in episode six I called it. That isn't a good thing.

The other aspect of the season, again tangentially bordering Elektra, was Matt's proposal to her at the end of episode eight. He convinces her to drop Stick and start a life of pious vigilanteism with him instead, and Elektra finally agrees, letting Stick go and fully committing to Matt.

Then, basically at the beginning of episode nine, when Elektra kills a kid that was about to kill Matt, Matt's like "Um...about that spending the rest of our lives fighting crime together thing? Yeah, never mind."

That drove me crazy, in case you can't tell.

I get that she killed someone after basically committing to Matt that she wouldn't. But the dude doesn't have at least one ounce of FORGIVENESS in him? Isn't that what he's trying to instill in her--that people--even people who do bad things--deserve second chances?

That whole sequence was a huge miss for me. If it had happened over much more time, with accompanying character arcs (because that bit not only affects Matt and Elektra, but Karen as well), it'd be fine. If they had just shown me a bit of Matt's motivation behind what went on, I'd at least be able to let it go. But, as is, it does none of those things, and that really bothers me. For a show with such phenomenal writing, I'm very disappointed to have seen something so mishandled.

So that's my take on DD2. I'd like to rewatch DD1 and 2 together in the near future, and I might change my mind once I do that. But (a) it doesn't look like I'll have time to do that anytime soon, and (b) even if I do, I highly doubt I'll change my mind about this.

DD2 is great television, and absolutely worth the watch. I'm nitpicking at it because I've seen the writers do such great things in the past. But, for me, it just wasn't as strong as DD1 or JJ.

Retreat to the House on the Hill II

As some of you may remember, last year I attended a writing retreat here in Utah and it was amazing.

Well, I attended the same retreat two weeks ago, courtesy of the eclectically brilliant, academic-hating, ice-giant-of-a-man Dave Butler, and once again triumphed over my writing foes.

I can't say for sure exactly how much work I got done this time because it was mostly revision, but I revised upwards of 80,000 words, and re-outlined the main story braid of book 2 in the Chaos Queen Quintet for further revision. It was fantastic.

The retreat is a cool thing for a number of reasons. (1) I get a lot of writing done. Writing happens pretty much from the moment everyone wakes up until dinner that evening, with itty-bitty breaks here and there for lunch and shooting the breeze with the other retreaters. (2) I get to hang out with some other awesome writers--we all eat dinner together, and then play board games until the late hours. It is a lot of fun, and this year I got to hang out with Jon Rock, Daniel Braithwaite, Scott Taylor, Aaron Michael Ritchey, Eric Patten, Michael Dalzen, and Marion Jensen. We had a special guest in the form of Nick Dianatkhah, and of course were hosted by Dave Butler.

It was quite an enjoyable week.

And they are gorgeous.

The Salt Lake and Utah Valley areas are pretty awesome when it comes to nerdery. There are a lot of great conventions, conferences, symposiums, retreats, and pretty much anything else a budding writer/nerd enthusiast could want.

This past weekend was one of them: Salt Lake Comic Con FanXperience!

FanX is sort of the younger sibling of the giant Comic Con in Salt Lake every fall--I think Comic Con caps out at around 150k memberships, while FanX is somewhere between 50-100K. But it is still quite the Con, and was a lot of fun.

I was on two panels (one on Joss Whedon and his protagonists, the other about Vampires), both of which were great! We had great moderators, great panelists, and of course great audiences. Between the panels and just wandering around the Con, I was able to meet a lot of great authors. That's one of my favorite aspects of these things--meeting awesome people. And did I ever.

So, FanX was definitely a success. It makes me look forward to World Horror (in Provo) and SL Comic Con that much more!

Now, enjoy this picture of me, looking somewhat professional and like I sort of know what I'm talking about:

Worth a thousand words and all that...

Salt Lake Comic Con's FanXperience is coming up later this month! It's basically an excuse to have another Comic Con event, and let me tell you the ones that these people put on are fantastic. There are tons of celebrities, lots of cool booths and shops and statue replica thingies and cosplaying and all kinds of other awesome events. Not to mention...I'll be on panels at this one!

I'm on two panels at FanXperience. Check 'em out! 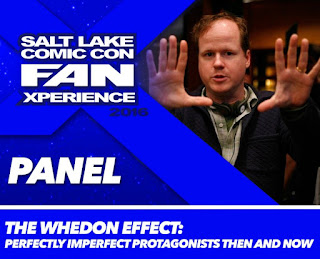 Thursday 24 March at 3:00 PM (Room 151A) - "The Whedon Effect: Perfectly Imperfect Protagonists Then and Now"
Comic Con's description: "Joss Whedon is an undisputed master of the smart snarky hero/heroine that could really use therapy. Still they manage to save the world anyway, and we love them for every flaw. From Buffy and Angel, to Malcolm, River and the Firefly, and now to his grand twists on the Marvel Universe, Whedon has a way of changing the landscape and giving us worlds and characters we can't let go of... even years later. A discussion with authors and superfans of why we love these damaged characters and where Whedon seems to be headed next." 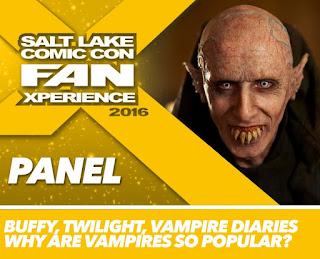 Comic Con's description: "Vampire lore has existed from the beginning of literature. Why does it remain so popular? What more can creators do to make them unique to their stories?"

I'm very excited to be on both panels. As you can see, both cover topics that I love to talk about. If you'll be at FanX, come check them out! Say hi! Get a business card (because I'll have official business cards)! It's gonna be awesome.
Posted by cbh at 3/14/2016 03:49:00 PM No comments:

What have I been doing for like the past six months? you ask.

Let me tell you:

TAKING CARE OF A BRAND NEW BABY, that's what.

This, folks, is baby B. Back in late August my incredible wife had a very short but intense labor, totally rocked it, and little B is the result.

In December my wife went back to work, and I've been doing the stay-at-home-dad thing while also trying to write full time. It has been an interesting process (one worthy of another blog post entirely), but I'm happy to say that things are going wonderfully on both fronts (baby and writing). And it looks like blogging may finally be working its way back into my regimen as well :-).

I've included a picture montage of the past six months for you. Enjoy (because, seriously, my child is freaking adorable).

Email ThisBlogThis!Share to TwitterShare to FacebookShare to Pinterest
Labels: B, baby B, beginnings

Where to buy DUSKFALL

In other news, one of the many cool things that's been happening lately is seeing Duskfall pop up for pre-order in all kinds of places. I figured I'd collect all the locations I can find where DF is available for purchase and list them here, for your convenience (and for my ego).

You'll notice the gorgeous cover art is already up on most of these websites--I'm still completely fanboying out about that.

In most online places, Duskfall is available in trade paperback for $14.95 and in ebook format for $7.99.

So, some of you may have already heard this already, but I just have to post it here. Something awesome happened: 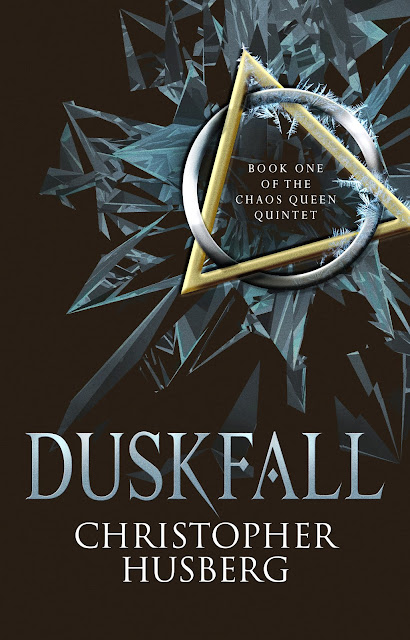 Yeah. That's the cover of my first novel, Duskfall, coming out June 21st. Well, what do you think of this cover, Chris? some of you may be asking. Allow me to respond.

Folks, this cover is gorgeous. It is everything I've ever hoped for in a cover. It is beautiful, it is detailed enough to draw me in but subtle enough to leave me with questions (or at least I think it would if I hadn't read this book a dozen times already), it totally avoids typical fantasy cover cliches, I love the title font, I love the fact that my publisher came up with "Chaos Queen Quintet" (because that sounds much cooler than the "Chaos Queen Series"). I love it all. This cover is divine. (It reminds me of a UK Joe Abercrombie cover, which are some of my favorite covers of all time.) Huge thanks to the folks at Titan for coming up with such an awesome design.

So, yeah. I'm very happy about it.

That's all for now--there's a lot of other stuff going on right now that I'm excited to blog about, so hopefully I'll be posting a bit more in the future. But, in the meantime, here's some awesome things people are saying about my book cover:

My publisher, Titan Books, revealed the cover on their blog.

Stefan over at Civilian Reader had some pretty neat things to say about it.

My agents-across-the-Atlantic featured it on their blog.