So about eight months ago I decided it would be a great idea to sign up for the Portland Marathon. Running a marathon has always been a bucket list item of mine, plus I've got some family up in Portland who were planning on running the half marathon, and it sounded like fun to all run the race together.

Well, I conveniently forgot about the fact that I'd signed up for this marathon until about halfway through June. After a brief panic, I came to my senses and laid out a training plan. I'm not what you would call a faithful runner by any means, but I'll go in spurts where I run consistently for 4-8 months, and then take a break for about the same amount of time. I've done five different half marathons and a dozen or so other races, so I'm not a complete noob. But until last weekend I'd also never run a full marathon before, and 26.2 is a lot longer than 13.1, I'll tell you what.

So anyway, I started training. Some of my long runs went well, and some didn't. There was a brief period where I was seriously considering dropping out of the race, or trying to slip into the half marathon instead (which wasn't possible anyway). But I didn't. And I'm really glad. Because the race was actually quite fun.

The lower altitude and race-day adrenaline (15,000 people running a race at the same time provides a whole lot of energy) more than made up for my less-than adequate training. I didn't get a competitive time by any means, but I finished, and that's all I really cared about this time around*. Also, it was a lot of fun to run the race with family. One of my uncles ran the marathon with me, and seven others--including my grandma, so, yeah, amazing--ran the half. It was a fun weekend, fun to see family, fun to do something relatively healthy, and fun to be part of such a great race.

Anyway, I was tempted to write some expose on how running is a lot like writing a book, or reading a book, or a character's arc (David Farland actually shares a great example of how running is a lot like a character's arc in his book Million Dollar Outlines), or something else. But I'm not going to do that. The truth is, running is like a lot of things. Writing is one of them, and so is reading. But this time, for me, running was running, and that's all I'm going to say about that. Now, for what really matters: pictures!

So, my agent asked me yesterday whether I had an "author photo." I briefly panicked, responded that I did not, and then scoured my Facebook photos and the photos on my hard drive for anything that might pass as a head shot. Turns out I take very few photos of myself, alone, that are remotely serious or professional in nature. The following are what I came up with:

As you can see, the first batch I sent my agent was abysmally*** slim pickings. Unsurprisingly, he asked if there was anything else. So I took the following improvised selfie:

So, yeah, that's my temporary author photo. (No need to panic--this photo won't actually go in any books, it's just something my agency needed on-file for some stuff.) On the to-do list now, of course, is to get one professionally done. I can only imagine that being awkward. To me it just sounds like taking school photos all over again, and to that I say: ick.


* Not FPS shooter head shots, mind you, or the type of shot that kills zombies. Just photos, people.

** Full disclosure: I stole both of those jokes from Facebook comments. ...thanks, Aunt Jeanne. And Dad. (No, seriously, look:) 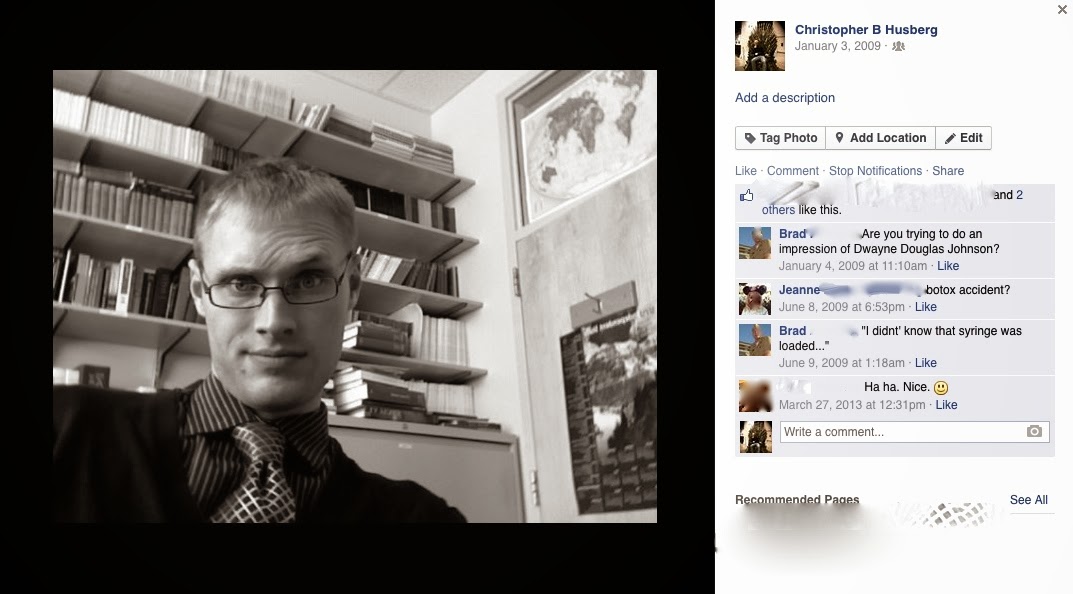