I'll once again be at Salt Lake Comic Con this year, now named Salt Lake FanX, after San Diego Comic Con sued the convention for use of the term "Comic Con"....no comment there...

I signed the petition mentioned in the timeline along with hundreds of other authors. And, I'm happy to say, FanX has begun to handle each of those issues in respectable ways. For the record, I really like and appreciate FanX as an institution, and I really like, respect, and appreciate some people within the FanX infrastructure. There are a few people who really seem, at best, to create drama wherever they go, and at worst, actively harm others. I'm not interested in supporting an organization that does that sort of thing. So, while I am hopeful for the future of FanX, and hope that it can be an inclusive, welcoming, tolerant, open-eared and open-minded place, I am still pretty wary of everything involved in the situation, and I'll be keeping a close eye on things as they develop. If FanX bungles anything further, it's likely I'll withdraw my support and participation (which would be unfortunate, as I enjoy interacting with fans at FanX and selling my books, but it's something I'm definitely willing to do.)

So! All of that aside, I am going to be at FanX next week, and I'll be on four panels. See my schedule and descriptions of each event below. I'll also be hanging out at Bard's Tower when I'm not on panels, so if you're at the con and don't make it to one of my panels, by all means stop by Bard's Tower and say hello (and buy some of my books, signed)!

I'm definitely looking forward to interacting with the other authors and fans at the convention. I hope to see you there! 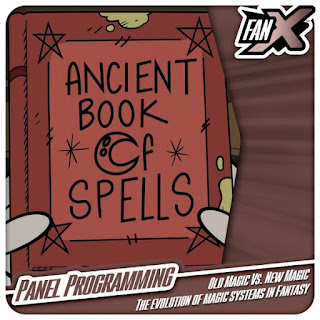 3PM (251A) - Old Magic vs. New Magic: The Evolution of Magic Systems in Fantasy
Join authors L.E. Modesitt of The Imager Series, Christopher Husberg of The Chaos Queen Quintent, Brian McClellan of The Powder Mage Series, Brian Durfee author of The Forgetting Moon, and Peter Orullian of The Vault of Heaven Series as they discuss the evolution of magic systems throughout fantasy.

4:30PM (Booth 401) - Christopher Husberg Signing at Bard's Tower
As I mentioned, I'll be in and out of Bard's Tower selling and signing books all weekend, but this will be the first of my "official" signing times. 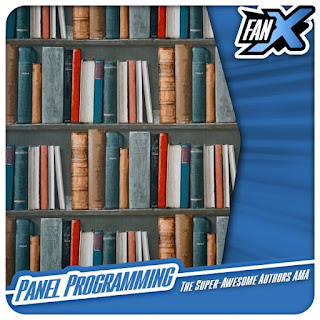 7PM (150G) - The Super-Awesome Authors AMA
This awesome panel of pro writers are ready and willing to answer (almost) any questions you have about what it takes to make it as an author in the 21st century. Maybe you’re dreaming about publishing that first novel, but you’re not sure which way to go. Is it better to take the indie route? Aim for the traditional New York path? Will you need an agent? What about book marketing? How do you build an author brand? What’s the reality of selling books at comic cons? Will brick and mortar bookstores go the way of the dinosaurs? Is Amazon really the future? These questions and (almost) any other will be answered at this super-awesome author AMA!

2:30PM (Booth 401) - Christopher Husberg Signing at Bard's Tower
Once again, while I'll be in and out of this booth all weekend, this is another one of my "official" signing times. 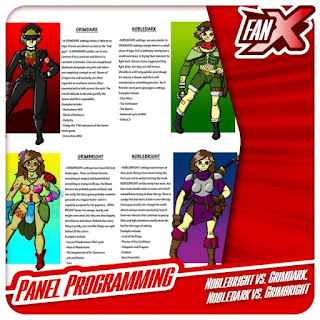 6PM (255A) - Nobelbright vs. Grimdark, Nobledark vs. Grimbright
Noblebright: the polar opposite of grimdark. The traditional fantasy story in which good saves the world. But not every story fits neatly into one of those two categories. And what about the other two quadrants on the spectrum, nobledark and grimbright? You'll learn what each of those mean, and perhaps learn a new term to classify your favorite kind of stories and games. 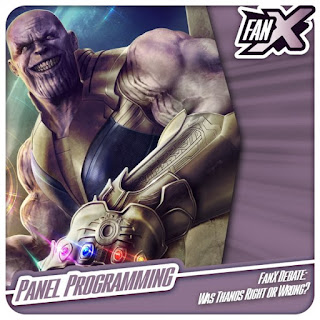 7PM (250A) - FanX Debate: Was Thanos Right or Wrong?
Avengers: Infinity War is the first superhero film to gross over $2 billion worldwide, breaking numerous box office records and becoming the highest-grossing film of 2018, as well as the fourth-highest-grossing film of all time and in the United States and Canada, but the question remains: Was Thanos right or wrong with his actions in the film? FanX proudly presents a formal debate where this question will be presented, analyzed and defended on both sides of the issue. Come and join the fun by weighing in as our panel struggles to stay alive, keep from turning into wispy mulch, and look forward to the sequel coming out in May of 2019.

We all have different corners of geekdom that we call our own. That concept in and of itself is a post for another time, but one of my personal favorite corners is DOTA 2, which I've mentioned recently in conjunction with my current research subject, artificial intelligence.

Well, this week it's time for The International, one of the largest and most prestigious esports tournaments in existence--and easily the one with the largest prize pool (almost $25 million this year).

I fully recognize most people don't even know what I'm talking about here, let alone care about it, but, well, The International is a really cool thing. I'm currently still racing to finish book 4, so I won't be able to watch nearly as much of the tournament live as I would like, but I'll certainly still tune in to  catch some of the games when I can (especially those involving EG and Liquid), and be following recaps and summaries on the DOTA 2 subreddit.

The video below relays some of the intensity, drama, and general awesomeness of The International. It's cool, ya'll. Way better than the League of Legends World Championship (boooooooo). Way better than Overwatch League or the Heroes of the Storm Global Championship (meh). It even blows the Starcraft 2 World Championship Series out of the water (and don't even get me started on things like CoD or Fortnight. Zzzzzz.) Them's fightin' words, I know. But, well, fight me on it, ya'll, I dare you.

So, if you're interested, check out the video below!

Email ThisBlogThis!Share to TwitterShare to FacebookShare to Pinterest
Labels: corners of geekdom, Dota 2, The International 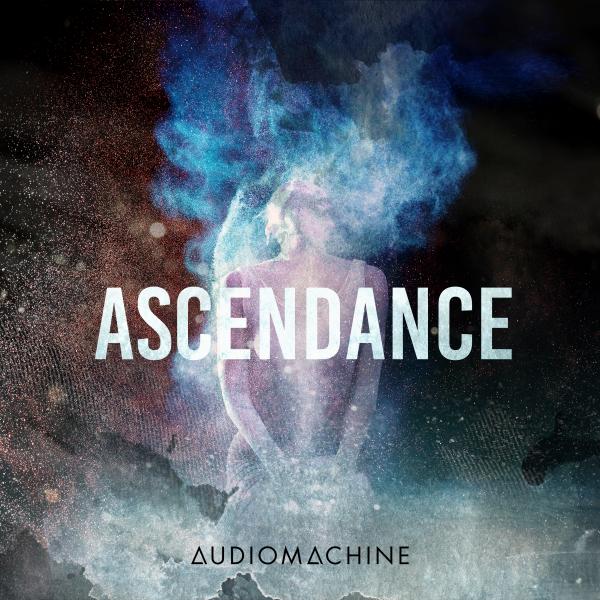 It's no secret that I'm a big Audiomachine fan, so whenever they come out with a new album, I'm all over it. Well, their newest collection, Ascendance, just became available on Apple Music, and I'm loving it. I'll have to give it a few weeks to be sure, but I think it's one of my top three or four albums they've released.

Some context: Audiomachine creates my favorite writing music. They make epic music (mostly for movie trailers), and it fits perfectly with an epic fantasy writer who loves to write with music in the background (me).

I'll be at Worldcon 76 in San Jose this weekend! This will be my seventh Worldcon (after Renovation, Chicon, LoneStarCon 3, Sasquan, MidAmeriCon II, and Worldcon 75 in Helsinki, Finland), so I know my way around the block at this point. It's a convention I always enjoy, and I'm looking forward to another year.

I'm not on any official programming this time around, but you'll see me hanging about--likely doing a lot of writing, as I'm racing to finish Book 4 at the moment. Look for me in hotel lobbies, hitting up a few panels, and generally barconning it up.

I'm a big DOTA 2 fan. I've been aware of it since it's conception as a Warcraft III mod. I was aware of the WC3 custom game arena back in the day, but spent most of my time playing both the campaigns and online matches of WC3. (And time well spent, imo--WC3 is still one of my all-time favorite video games.)

My younger brothers, though, played DOTA (the Defense of the Ancients custom game created from the WC3 editor) a lot. I looked over their shoulders on occasion and while it looked interesting, there was something about the game that just didn't draw me in.

Flash forward to about ten years later--about 2012--where my siblings and I are playing Starcraft 2 on a pretty regular basis. Most of that involved 4v4 matches, but on occasion my sister's husband wanted to join us, and that meant we had to find a 5-player game. We turned to some SC2 custom games, which included Aeon of Storms, as it was called at the time (another MOBA). We played this for a while, and then found out DOTA 2 was going to be released soon for free on Steam, and, well, the rest is history.

I play the occasional action, role-playing, or survival horror game on PS4, but DOTA 2 has been my go-to game for the past few years, now. It's fun, it's incredibly complicated, and it's very competitive. (It also notoriously has one of the worst-mannered gaming communities in existence, but you win some you lose some, ya know?)

So, DOTA 2 is cool. If you're curious, Juggernaut is one of my all-time favorite heroes, but lately I've also been playing a lot of Pudge.

Anyway, with all that being said, there are some interesting developments involving DOTA 2 and one of my other current interests, AI.

An interesting exhibition match happened last year at The International 7 last year (the most prestigious DOTA 2 tournament, held every year, which consistently has the highest prize-pools in e-sports history). Dendi, one of the best and most famous DOTA 2 players in the short history of the game, faced off in a one-on-one scenario (DOTA 2 is usually 5v5) against a special opponent: an OpenAI bot--or, in other words, an artificial intelligence developed by the OpenAI research company, funded in large part by Elon Musk.

In short, the bot dominated.

OpenAI has continued working hard on their DOTA 2 program because they feel that the DOTA 2 video game presents a particular challenge for an AI. It is one of the most complicated and nuanced video games in existence. But don't take my word for it, take OpenAI's (from their recent blog post):

Dota 2 is a real-time strategy game played between two teams of five players, with each player controlling a character called a “hero”. A Dota-playing AI must master the following:

It's all pretty exciting.

At least it is for me :-). I recognize these are two very niche subjects that, when combined, form even more of a niche subject, and I'm okay with that. But, hey, I find it fascinating.

I have a lot of other thoughts about the machine learning processes OpenAI has experimented with to get to the point they are at today in DOTA 2. I have even more thoughts about the implications of such things--that is, after all, in large part what my next project is about!

While I'm hard at work finishing the Chaos Queen Quintet, I've also been making time to research my next (post Chaos Queen) project. For the most part, that means researching artificial intelligence, artificial super intelligence, nanotechnology, and so forth. Here's what I've read so far: 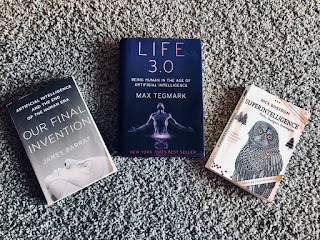 And here's what's coming up (as soon as I finish book 4): 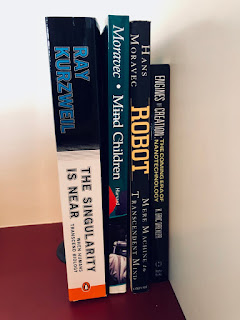