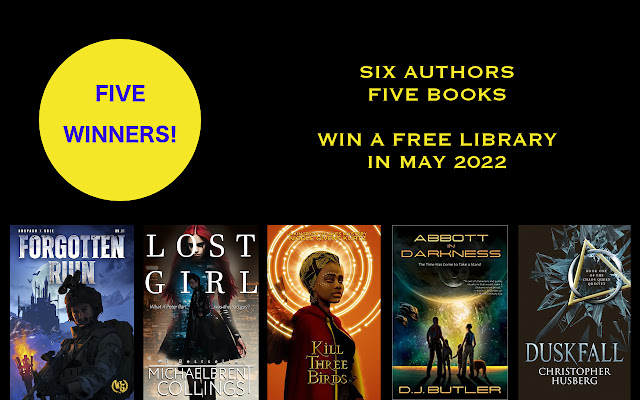 Alright, it's been a minute, I know. I'm sure at some point I'll go into what I've been up to for the past...while.

But for now, prizes!

When you sign up, make sure you click on the link in the confirmation email (you might need to check your spam folder). If you reshare the giveaway through the links on the confirmation page, you'll also get more entries into the drawing and improve your chance of winning.

Here's a quick run-down of each book in the giveaway:

Orcs. Trolls. Wraith riders. Dark wizards. Together, they form an unstoppable force. Or so they thought.

When a Joint Task Force of elite Rangers are transported to a strange and fantastic future where science and evolution have incarnated the evils of myth and legend, they find themselves surrounded, pinned down, and in a desperate fight for their very survival—against nightmares of flesh and blood made real. Which means only one thing.

It’s time to Ranger Up and stack bodies.

The forces of evil have no idea how dangerous a Ranger has been trained to be, and once the action starts, it won’t let up in this no-holds-barred, full-auto, epic battle for survival in the Forgotten Ruin.

From the creators of Galaxy's Edge...

Buy in, and jock up for this thrilling WarGate adventure. A battle unlike any other is calling.

What if Peter Pan... was the bad guy?Eve has no father. An alcoholic mother. Abused at school. A loser. But when the new boy comes to school, things start to change. He's popular, he's good-looking, he's smart. He likes her. And he wants to kill her. Because he's Peter Pan. And he's a vampire.

Sent to investigate a strange murder in a quiet remote egg, can Hawk Tasifa find the killer before she becomes the next target?

Prentice Tasifa is an investigative hawk whose been deployed from The Order to the small egg of Gould, a mountain village. A missing girl had been found dead. Hawks investigate strange and difficult situations throughout the kingdom of Aves. They can “see the unseen,” by accessing a unique ability to activate hawk-like vision, a trait they carry through their bloodlines.

When Prentice arrives in Gould, she soon discovers that there isn’t just one bird dead, but three. Has the hidden town’s secrets contributed to the deaths? Did the victim’s controversial relationship?

There’s a serial killer operating in little known Gould, and she has to find the person before she ends up next.

Abbot in Darkness by D.J. Butler

John Abbott is all in.

He’s up to his eyeballs in debt to pay for school, and he’s just moved his small family forty light-years from Earth for a plum job with the wealthy interstellar corporation, The Sarovar Company. John’s first assignment is to discreetly investigate possible corruption at the remote Arrowhawk Station, where Company traders buy the famous Sarovari Weave from the three-sided, crablike Weavers.

John finds evidence of theft and worse, but when the guilty parties realize he’s getting close, they come after him and his family. Can John catch the thieves and end their corrupt trade? Can he head off a war between the Company and the Weavers? Can he make a life for his family in this remote wilderness without corrupting himself?

With no way back to Earth, the only direction for John Abbott and his family to go is forward—into danger.

And if you don't know about Duskfall by yours truly, why are you even here??? But also go ahead and check it out.

They all sound pretty awesome. But don't take my word for it! Sign up for the giveaway!