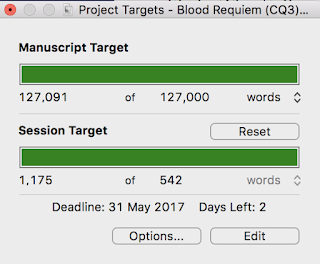 As you can tell by the progress bar to the right, I've finished the first draft of Book Three of the Chaos Queen Quintet, Blood Requiem!

I'm quite happy about this--not only because finishing a draft of a novel is always a pretty awesome feeling, but also because this one realized itself much more smoothly than Dark Immolation. DI took me, all things considered, more than two years of writing time--about a year for that first draft, and more than a year for subsequent revisions. Two plus years was far more than I'd intended to spend on that draft, but, well, life happened, and turns out my first sequel was a pretty beastly undertaking.

That said, as difficult as DI was to write, it was a pretty phenomenal learning experience, and BR would not have  been nearly as smooth without that. That's life in a nutshell I guess, huh? Anyway, the process went so well that I've more than made up for how far DI put me behind schedule. A revised draft of the book is due to my editor in August, and two months is more than enough time to make that happen (and might just mean I'll have time to work on a different project or two before I start work on Book 4).

So, I usually do a little rundown of my process and the production itself when I finish a book (check out the one for Duskfall--the first thing I ever posted to this blog!--and the one for Dark Immolation), and of course I'll do the same with BR!

And, well, that's the gist of it. Long story short, I'm happy to be done with a draft of Blood Requiem, and feel very good about the story at this point in time as well as where I think it will go in revisions.

Stay tuned for some stuff on the two writing retreats I participated in that helped me plow through Book 3 in so short a time, as well as information on the Dark Immolation book launch, and more!
Posted by cbh at 5/31/2017 03:29:00 PM No comments:

Duskfall has officially made it as a finalist on the David Gemmell Morningstar Award ballot!

That means Duskfall is considered by many to be one of the best debuts of 2016, and it's in great company--overall pretty stellar stuff, if you ask me. I'm flattered and very happy that the book has gone this far.

If you're interested in helping it go a little bit further, go vote for it now! Before the end of the month!

The winner will be announced on Saturday, 15 July at Edge-Lit 6 in Derby, UK. I will, of course, keep you posted on how that goes.

Thank you to all of you who have voted, and who will vote in the near future! I'm grateful so many people are enjoying the book, and I can't wait for all of you to get your hands on book two in just a few weeks.

I'll be at the Orem Barnes & Noble THIS SATURDAY from 2-5 PM for their Authorpalooza event. Come get signed books and other swag from myself and my ilk (if I can call awesome authors like Jessica Day George, Dan Wells, and Christopher Paolini my ilk...which I shall...). I'll be on a panel at 3:30 on "Adult Genre Writing," and will otherwise be hanging around signing books! It's gonna be great, so come check it out.