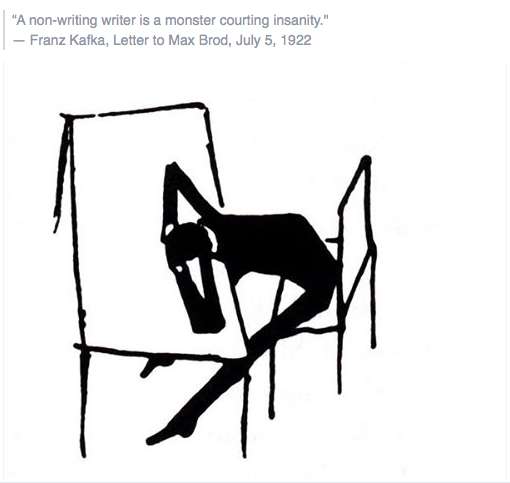 Email ThisBlogThis!Share to TwitterShare to FacebookShare to Pinterest
Labels: insanity, not writing, writing

For your convenience and pleasure, here's a round-up of my recent posts from the trip to Italy Rachel and I took a few weeks ago. Enjoy!

If you haven't read this article about how lazy writing is destroying the 'strong female character' stereotype (which became flawed when it became a stereotype to begin with), you should check it out. Like, now. And if you're doing any kind of creative work, you should ask yourself the questions   posed at the end of the article. They're worth asking.

Tasha Robinson, the author of the article, states that


"Strong female character" is just as often used derisively as descriptively, because it's such a simplistic, low bar to vault, and it's more a marketing term than a meaningful goal. . . . It's still rare to see films in the mainstream action/horror/science-fiction/fantasy realm introduce women with any kind of meaningful strength, or women who go past a few simple stereotypes.

Now I've been a "strong female character" (how about SFCs for short?) advocate for a long time, but there is a lot of truth to Robinson's statement. Many of us (authors, filmmakers, screenwriters, fans, readers, you name it) have become so obsessed with creating SFCs that we've forgotten why we wanted to make them in the first place--or, on the more sinister side of that coin, we attempt SFCs because that's what the market tells us to do, or that's the best way to reach a certain demographic, or whatever.

Unfortunately, SFCs have become as much of a stereotype as the stereotypes they were meant to combat. But it's the fact that SFCs even exist--that I have to create an acronym for such a term in the first place--that is the real problem. Because strong women existed long before SFCs were ever coined. Strong women have led nations, fought wars, survived crazy things, and died for what they thought was right. But, for some reason, we've shied away from portraying such women with even a fraction of the zeal with which we portray strong men in film, literature, and TV. Are there great films/books/etc. that portray SFCs? Of course there are. But (1) those works are far too few, and (2) the creators of said works are constantly bombarded with questions along the lines of "why do you create such strong female characters?"

Let's think about that question for a moment. "Why do you create such strong female characters?" Can anyone else see something off here? Why do we ask these creators why they make such SFCs when we could just as easily ask the great masses of people who neglect to give their female characters strength, intelligence, personality, leadership skills, wit, or any meaningful part of the story in general why they don't write SFCs? Do you see the disconnect there? Do you see the glaring inequality implied by that question?

Creating SFCs isn't about making women into men; women can have physical strength, to be sure, and can even act like men and have other masculine qualities and that is great and there is a place for those portrayals in fiction. But women can also be powerful through their intelligence, their sexuality, their strength of will, their cunning, their femininity, the sheer strength of their presence, and just about any other attribute you could come up with. That's what writing SFCs is about--or, at least to me, that's what it should be about. It's more than giving women equal screen or page time; it's more than making sure women kick bad-guy ass every once in a while. It's giving women--and men, believe it or not, because we can value and look up to women, too--female characters to admire, to aspire towards, or even to question and study and analyze.

Look, don't take my word for it. Listen to what Joss Whedon has to say about the whole thing--in fact, a lot of this blog post is drawn from what Whedon says about equality and "strong women characters" in this speech. Jump to 2:05 to hear him start talking about his responses to the "why do you write such strong women characters" question. His responses are some of the best I've ever heard.

Is the SFC movement broken? I don't know. It does seem to have lost perspective. I still think it's silly that it has to even be a thing to begin with. But that's what's so crazy: it does have to be a thing. Because the way things are now is not cool. It isn't right. So I can say that I, at least, am going to continue writing female characters, and they're going to be strong*.

* And, in this case, strong may refer to any and/or all of the following (pilfered from the OSX Dictionary App):
strong |strôNG|
adjective (stronger |ˈstrôNGgər| , strongest |ˈstrôNGgist| )1 having the power to move heavy weights or perform other physically demanding tasks: she cut through the water with her strong arms.• [ attrib. ] able to perform a specified action well and powerfully: he was not a strong swimmer.• exerting great force: a strong current.• (of an argument or case) likely to succeed because of sound reasoning or convincing evidence: there is a strong argument for decentralization.• possessing skills and qualities that create a likelihood of success: the competition was too strong.• powerfully affecting the mind, senses, or emotions: his imagery made a strong impression on the critics.• used after a number to indicate the size of a group: a hostile crowd several thousand strong.2 able to withstand great force or pressure: cotton is strong, hard-wearing, and easy to handle.• (of a person's constitution) not easily affected by disease or hardship.• not easily disturbed, upset, or affected: driving on these highways requires strong nerves.• (of a person's character) showing determination, self-control, and good judgment: only a strong will enabled him to survive.• (of a market) having steadily high or rising prices.• firmly held or established: a strong and trusting relationship.3 (of light) very intense.• (of something seen or heard) not soft or muted; clear or prominent: she should wear strong colors.• (of food or its flavor) distinctive and pungent:strong cheese.• (of a solution or drink) containing a large proportion of a particular substance; concentrated: a cup of strong coffee.• (of language or actions) forceful and extreme, esp. excessively or unacceptably so: the government was urged to take strong measures against the perpetrators of violence.
Posted by cbh at 6/19/2014 12:13:00 PM No comments:

Ok folks, now for what you've all been waiting for...THE FOOD. Because what is a trip to Italy without loads of delicious food??

That's it, everyone. To sum up: Rachel and I went to Italy, saw a million cool things, ate a billion delicious things, and had lots of fun. It was amazing and we're already planning a return trip. The end.
Posted by cbh at 6/19/2014 09:08:00 AM No comments:

Who wants more pictures from Italy? I imagine everyone in the world is shouting yes right now, so who am I to stand in the way. Next stop on our Italy trip was Cinque Terre...

After the Cinque Terre, we moved on to Milan and its outrageous Duomo...


And, last but not least, we zipped over to Venice (Venezia) before heading back home to America...


Aaaaand that concludes our tour of Italy! But wait--we're not done yet. In the next day or so I'll publish one more post, perhaps the most important post of all (at least when it comes to Italy)...