Promotional Thingies for FEAR THE STARS

Now that Fear the Stars is finally upon us, I've been doing some things here and there around the inter webs to promote the book, and figured I'd compile them here for your convenience.

In Which I Talk About Music, and Writing While Listening To It

In Which I Talk About Writing with Rituals, and Not Just the Demon-Summoning Types

FEAR THE STARS is available NOW! 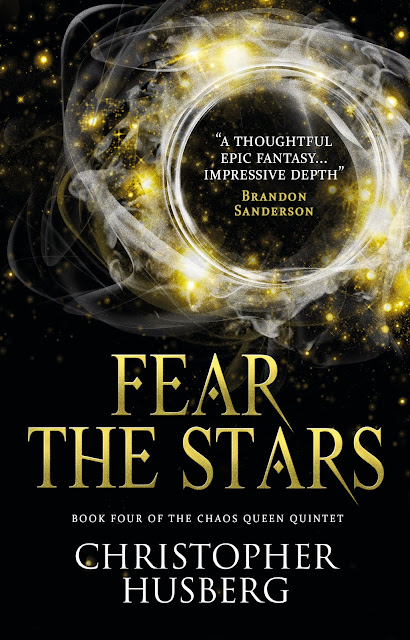 Fear the Stars, book four in the Chaos Queen Quintet, is available in the US today!

It already came out a couple weeks ago in the UK, so it's now available in most English-speaking areas.

Order it from Amazon, order it or buy it from your local B&N, or get it from a variety of other places (namely Powell's!).

I'm hosting an AMA (Ask Me Anything) over at the r/fantasy subreddit all day today, so if you have any burning questions for me (Who is the Chaos Queen? Why do I like Taylor Swift so much? Whose blood did I drink to become so awesome? etc.!), head on over and ask them! Also upvote the post, if you don't mind, so more people can see it :-D.

And, of course, we've got the release day event tonight at Weller Book Works in Salt Lake City! If you're in the Utah area, come on by! Starting at 6:30 PM we'll do a reading, a Q&A, and a signing. There will probably be official Fear the Stars t-shirts and other swag. It'll be fun time.

I'm very excited for Fear the Stars to reach the public. I love this book, it's my favorite I've written so far, and I can't wait for everyone to read it!

FEAR THE STARS available in the UK! 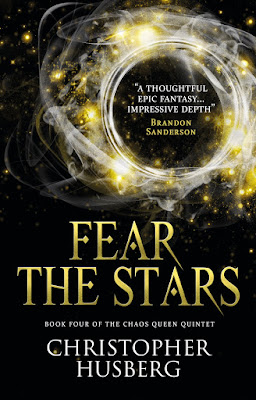 If you're in the UK, you can pick up Fear the Stars, book 4 in the Chaos Queen Quintet, TODAY! What are you waiting for?!

If you're in the US, you'll unfortunately have to wait until the 18th. But that's still soon! REJOICE!

The UK blurb is even better than the US blurb imo:

IN THE PITILESS VOID, EVEN THE STARS ARE NOT WHAT THEY SEEM
Many forces converge on the great city of Triah, bent on its destruction. By sea, Empress Cova of Roden sails with her armada, determined to bring the rival nation under her yoke. From land, Winter, the Chaos Queen, brings her tiellan army, set on revenge. And their advance brings a yet more terrible army still: awoken by the Chaos Queen’s powers, daemons mass on the border between worlds, waiting for a way in.
Caught between the encroaching foes, a small group holds the key to saving the Sfaera from destruction: Knot, the former assassin; Cinzia, the exiled priestess; and Astrid, the vampire-child. But the only way to do so is to step into the Void beyond worlds—from which no one can return unchanged.

You can check out Fear the Stars on Amazon UK here. 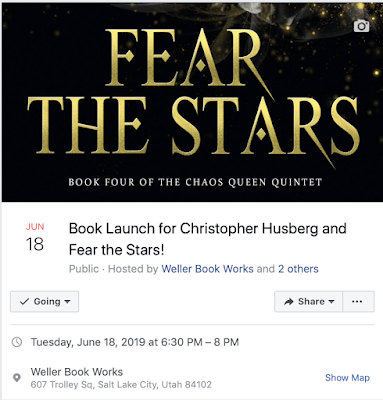 This is, first of all, a reminder that the US release date for Fear the Stars has been pushed back until Tuesday 18 June! That's two weeks later than the originally planned release date (which was actually today). My publisher pushed back the release date this time around just slightly because last year there were a few issues getting copies of Blood Requiem out to bookstores on time. Hopefully, that will be remedied this year, and all of your local bookstores will have plenty of copies.

Incidentally, the UK release date remains the same--this Thursday, 7 June--so those lucky folks will get copies of book 4 before anyone else this time around!

Second of all, if you're in the Utah area, consider coming to my book launch at Weller Book Works at 6:30 PM on Tuesday 18 June!

This will be my fourth book launch at Weller's, and it's become one of my favorite events of the year because I get to see so many awesome folks I already love in my home state, as well as meet a few new ones, and I get to talk about one of my books. (Fear the Stars is particularly awesome, imo, by the way.) We'll have a grand old time, probs do a reading, definitely sign some books, might have another iteration of Chaos Queen t-shirts to hand out to folks who show up on time, etc. I may or may not sword  fight someone. You know, the usual. It'll be cool.

So if you'll be in Utah in two weeks, come! Tell your friends! Bring/invite a thousand people and make Weller's sad they didn't order more books! :-D

And, of course, here's the blurb for Fear the Stars:


All parties converge on the capital city, Triah - Cinzia and the Odenites to establish their new religion and appeal against a charge of heresy; Knot and Astrid to find answers in the vampire girl's past; and Winter has come to conquer the city, at the head of a tiellan army. But Winter is still struggling with her addictions and anger; Knot's efforts to be reunited with her can only lead to disappointment. Cinzia cannot free herself from a terrible bargain. And as the battle lines are drawn, the true nature of the goddess Canta, and the Odenites' final purpose, will soon be revealed...