Yeah, I missed Day 8 (Awesome Moment). I've actually drafted a post for that but didn't get around to revising or publishing it, so if I find time to do that, I'd be happy to do it retroactively :-). But, for today, I'm going to talk about a "challenge overcome." And this one's easy so easy I can say it in two words:

But what kind of blog post would be only two words?

I've said it before, and I'll say it again: this book was rough on me. Let's look at the timeline first.

I began writing DI in the fall of 2014. I finished a very rough first draft a little less than a year later, I think sometime in the summer of 2015. I took a couple months off from the book (to hang out with my brand new daughter and do some work on a YA novel I've had swimming around in my head for a few years now), and then started revising it in December of 2015. Revisions spanned from December 2015 until August 2016. Then, after a long talk with my agent, more revisions happened between August and October. After getting some feedback from my editor, my writing group,  and some beta readers, the final round of major revisions took place in January of this year.

So, yeah. DI took me almost 2.5 years to write. (In case you're wondering, that is a long time to spend on a book--even in epic fantasy.)

What made it so difficult, you ask? Well, let me count the ways:


Those three aggregates developed into a perfect storm of execrableness and writing hell. Each compounded the other until I was so depressed and discouraged that it was almost impossible for me to get any work done at all, some days.

To be clear, I'm not looking for sympathy. Things are actually exponentially better in my life right now, on all fronts--my life seems to have stabilized once more, I'm learning to either let go of or face and resolve the personal issues that came up last year, and, most visibly (and getting back to the subject of this post), Dark Immolation is FINISHED! The relief I felt at turning in that final draft was immeasurable. Ineffable. All of that means I'm feeling quite good right now, thank you very much.

To get back to the book, my relief (and sense of accomplishment, I might add) doesn't only come from the fact that DI is finished, but also from the fact that I think it's a pretty freaking awesome book. I'm very happy with the character work and events that occur in book two of the Chaos Queen Quintet, and I love some specific scenes in particular. (And I can't wait for you to find out what those things are!)

One more thing. As terrible a process as writing Dark Immolation was, there are some really great things that've come from it (in addition, of course, to a freaking awesome book). Namely, it's been a huge learning experience for me. I've approached the first draft of Blood Requiem much differently than I usually approach writing first drafts, and it's going quite well so far. I absolutely attribute that to everything I learned in writing book 2.

So, yeah. As a professional writer, the work isn't always cool fight scenes and character epiphanies. It's rarely that stuff, actually. But the cool thing? The end results are always worth the effort. 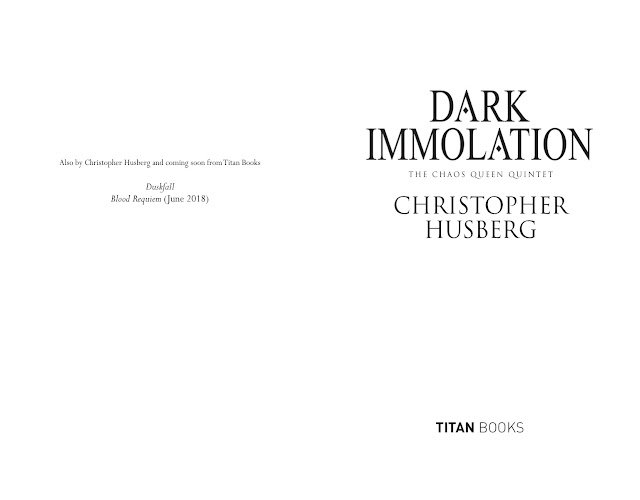