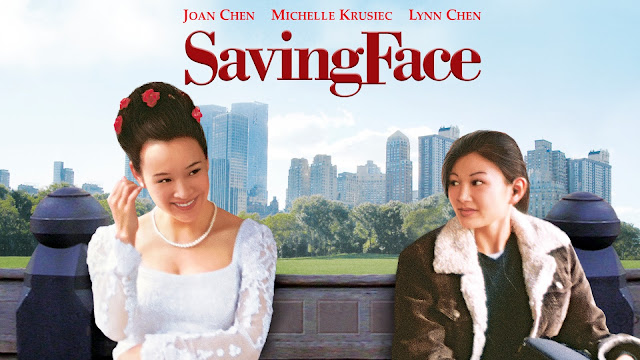 Day 13 of Queer Rep!
Saving Face is a queer Asian-American rom-com ahead of it’s time. It came out way back in 2004, written and directed by Alice Wu. (Alice Wu also wrote and directed The Half of It, another queer Asian-American rom-com that came out in 2020 that didn’t quite make my list but is also awesome and really good; and she helped write Over the Moon, a delightful musical fantasy film that also came out in 2020. I think what I’m saying is this: even though she’s only been involved in three major projects over the past 18 years, Alice Wu has produced some really strong stuff.)
And there’s something really refreshing about seeing older films (yes a film from 2004 is now classified as old, I’ve worked through it and apparently now you need to as well, don’t @ me) with queer characters that let them (a) just…be queer, (b) go through a believable arcs and conflicts (i.e. let them be queer and a person at the same time), and (c) perhaps most importantly find happiness. This film does all of those things, and it does them well. If you haven’t seen it, you should. 🏳️‍🌈
(check out master list here!)
Posted by cbh at 6/13/2022 02:15:00 PM