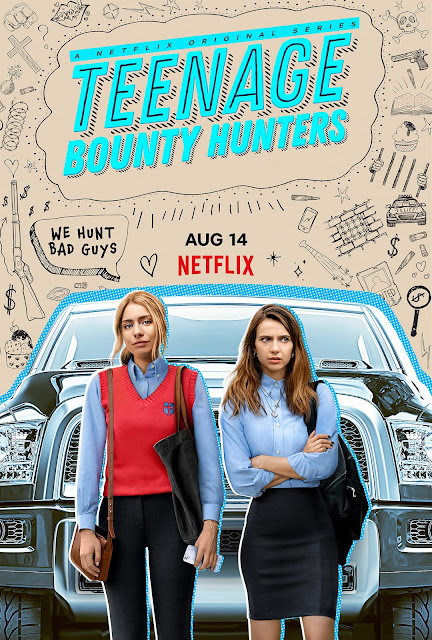 Ya’ll I have been waiting ALL MONTH to talk about this one. For Day 21 of Queer Representation: Teenage Bounty Hunters!

But first, a rant.

I mentioned Buffy the Vampire Slayer yesterday, and there’s no denying that BtVS has progressed beyond cult classic into legitimate classic in its own right. Classic enough that I’ve often heard people talk about “spiritual successors” or “heirs” to the BtVS zeitgeist. (If your response to that is “Chris I’ve literally never heard people talk about 'successors to the BtVS zeitgeist' or whatever,” my response to you is in two parts: 1 - you admittedly sound like a normal person so that’s fine and I’m happy for you, and 2 - you obviously need to watch more BtVS and read more about it and study it and discuss it in person with everyone you know and online with random people on the internet a lot more. Because you are living half a life.)

Anyway. Let’s be honest, BtVS left a big throne to fill, as it were. There are a lot of things that made Buffy so iconic. Quick, whippy, creative dialog. Grungy, indy rock and pop sprinkled perfectly throughout. Creating cohesive season- and series- spanning stories at a time when TV was almost exclusively week-by-week. Metaphor: using supernatural drama as a lens to examine teenage drama, and using both to examine universal fears, questions, and social issues. Characters—heroes and villains and everything in between—that were complex, multifaceted, and experienced growth and change in step with the series-spanning plot elements.

There have been a string of pretenders to the vacant Buffy throne over the years, all of them trying to replicate the above. The Vampire Diaries was an obvious candidate (and a show I acknowledged years ago when it was airing). An interesting new contender is First Kill, a vampire series that does have queer representation as well as a decent story and characters, but also falls short in a few areas. There have been many others, including one I’m mentioning tomorrow for Queer Rep, but none of them quite manage to lock down the throne.

The problem with most surface-level, failed “successors” to BtVS is that they focus too much on the teen and supernatural aspects of the show, and honestly they can't even get that stuff right. They hammer the supernatural without metaphor and nuance, creating stories that are admittedly dramatic but overwhelmingly hollow. They cram pop (and pop-adjacent, or pop-alt-rock, or indie-pop-whatever) music tracks into every possible scene that could remotely (or don’t remotely) call for music, and shamelessly stitch pop-culture references and the latest urban dictionary entries into otherwise uninspired dialog. What follows isn’t something that genuinely feels youthful, or current, or like it has something to say, but rather something that feels more like a Frankensteinian pop-culture monster crafted by a bunch of executives who googled “what do The Youth like these days?” and went with whatever was on the first page of results. Don’t get me wrong—teens (and really anyone remotely interested in pop culture) often still like these shows. They’re popular! And I’m not saying they shouldn’t be. I liked The Vampire Diaries and First Kill, for the most part. But they aren’t remotely in the same arena as BtVS.

No, my friends. The truth is, that throne sat empty and unoccupied since BtVS ended in 2004.

Unoccupied, anyway, until 2020, when Teenage Bounty Hunters was released on Netflix.

Teenage Bounty Hunters (TBH) is the One True Heir to Buffy. Let’s go down the list of things I mentioned earlier:

So it’s as good as—and in some cases better than (YES I SAID IT) BtVS on almost every level. And there’s more:

There’s really only one problem with Teenage Bounty Hunters: Netflix cancelled it after it’s first season.

I know, it’s horrible. And story elements and questions are left unanswered. And I can only imagine how great the series might have become if it had been allowed a few more seasons of life. But the lone season is so good that it’s absolutely worth watching. And I’ll be honest, if I were given the chance to resurrect one TV show from the grave of cancellation, it would not be Firefly. It would be Teenage Bounty Hunters. I know those are fighting words for just about everyone I know, but they're truth.

So, Teenage Bounty Hunters. It’s…so, so good. It inhabits the zeitgeisty throne of BtVS with august majesty. Watch it. Love it. Live it. Or whatever. 🏳️‍🌈